Thrice Great Hermetica and the Janus Age: Hermetic Cosmology, Finance, Politics and Culture in the Middle Ages Through the Late Renaissance (Paperback) 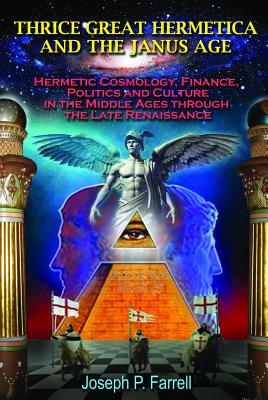 Thrice Great Hermetica and the Janus Age: Hermetic Cosmology, Finance, Politics and Culture in the Middle Ages Through the Late Renaissance (Paperback)


Usually Ships in 1-5 Days
What do the Fourth Crusade, the exploration of the New World, secret excavations of the Holy Land, and the pontificate of Innocent the Third, all have in common? Answer: Venice and the Templars. What do they have in common with Jesus, Gottfried Leibniz, Sir Isaac Newton, Rene Descartes, and the Earl of Oxford? Answer: Egypt and a body of doctrine known as Hermeticism. In this book, noted author and researcher Joseph P Farrell takes the reader on a journey through the hidden history of the Middle Ages, the Renaissance and early Enlightenment, connecting the dots between Venice, international banking, the Templars, and hidden knowledge, drawing out the connections between the notorious Venetian Council of Ten, little known Venetian voyages to the New World, and the sack of Constantinople during the Fourth Crusade. That hidden role of Venice and Hermeticism reached far and wide, into the plays of Shakespeare (a.k.a. Edward DeVere), Earl of Oxford, into the quest of the three great mathematicians of the Early Enlightenment for a lost form of analysis, and back into the end of the classical era, to little known Egyptian influences at work during the time of Jesus.