Indelible in the Hippocampus: Writings from the Me Too Movement (Paperback) 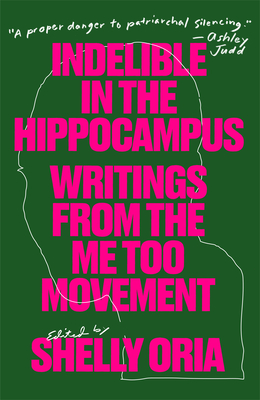 Indelible in the Hippocampus: Writings from the Me Too Movement (Paperback)

Indelible in the hippocampus is the laughter, said Dr. Christine Blasey-Ford when she testified to congress in September 2018 about the men who victimized her. A year earlier, in October 2017, the hashtag #MeToo shone a light on the internalized, normalized sexual harassment and abuse that'd been ubiquitous for women for generations.

Among the first books to emerge from the #MeToo movement, Indelible in the Hippocampus is a truly intersectional collection of essays, fiction, and poetry. These original texts sound the voices of black, Latinx, Asian, queer, and trans writers, to name but a few, and says me too 23 times. Whether reflecting on their teenage selves or their modern-day workplaces, each contributor approaches the subject with unforgettable authenticity and strength.

Together these pieces create a portrait of cultural sea-change, offering the reader a deeper understanding of this complex, galvanizing pivot in contemporary consciousness.