All the Fierce Tethers (Paperback) 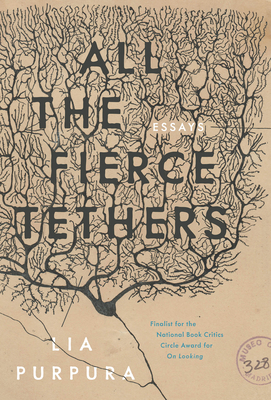 All the Fierce Tethers (Paperback)


Usually Ships in 1-5 Days
Readers familiar with Lia Purpura's highly praised essay collections--Increase, On Looking, and Rough Likeness--will know she's a master of observation, a writer obsessed with the interplay between humans and the things they see. The subject matter of All the Fierce Tethers is wonderfully varied, both low (muskrats, slugs, a stained quilt in a motel room) and lofty (shadows, prayer, the idea of beauty). In "Treatise Against Irony," she counters this all-too modern affliction with ferocious optimism and intelligence: "The opposite of irony is nakedness." In "My Eagles," our nation's symbol is viewed from all angles--nesting, flying, politicized, preserved. The essay in itself could be a small anthology. And, in a fresh move, Purpura turns to her own, racially divided Baltimore neighborhood, where a blood stain appears on a street separating East (with its Value Village) and West (with its community garden). Finalist for the National Book Critics Award, winner of the Pushcart Prize, Lia Purpura returns with a collection both sustaining and challenging.
Lia Purpura is the author of eight collections of essays, poems, and translations, most recently a collection of poems, It Shouldn't Have Been Beautiful (Penguin). On Looking (essays, Sarabande Books) was finalist for the National Book Critics Circle Award. Her awards include Guggenheim, NEA, and Fulbright Fellowships, as well as four Pushcart Prizes, the Associated Writing Programs Award in Nonfiction, and others. Her work appears in The New Yorker, The New Republic, Orion, The Paris Review, The Georgia Review, Agni, and elsewhere. She is Writer in Residence at The University of Maryland, Baltimore County, and teaches in The Rainier Writing Workshop's MFA program. She lives in Baltimore, MD.