Legends of the Wild West: True Tales of Rebels and Heroes (Hardcover) 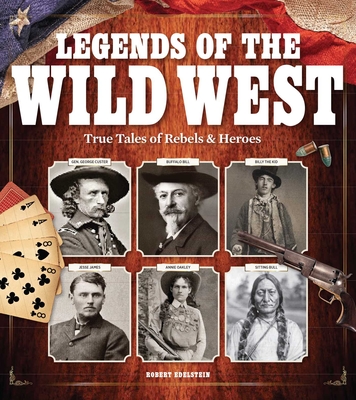 Legends of the Wild West: True Tales of Rebels and Heroes (Hardcover)


Usually Ships in 1-5 Days
For several hundred years, the West had been the land of dreams, an extraordinary region of hope, expansion and opportunity where European countries—and then the young USA itself—sent their finest explorers to plant seeds in a seemingly untapped, open landscape. This spirit captured the popular imagination in the Wild West, those raucous 30 years between the end of the Civil War and the beginning of a new century. Within these pages, readers will explore true tales of rebels and heroes such as General George Custer, Buffalo Bill, Billy the Kid, Jesse James, Annie Oakley, and Sitting Bull, among others.

The Wild West was the American Dream on steroids. It was an age of gunfights and gold rushes, cowboys and Comanches, with the likes of Buffalo Bill, Jesse James and Billy the Kid making their names. It forged extraordinary legends and even bigger lies, with everything fueled by dime novels written back East that encouraged folks to grab their share of a promise that was difficult for this hard land to keep.

This book looks at all these mythical characters, the start of the railroad across the nation, the cost it all dealt to the Native Americans whose land was lost, and the way Hollywood still keeps the dream alive. As historian Richard White says, “People could go west and no matter their failures elsewhere, they had an opportunity to remake themselves. It’s a symbol for a kind of individualism that actually doesn’t exist in the West, but mythically it does.”
Robert Edelstein has written about history, pop culture, television, sports, travel, health and film for TV Guide Magazine, Broadcasting & Cable, deadline.com, Hemispheres, Meetings & Conventions, Athletes Quarterly and many other publications and websites. His books include NASCAR Generations (Harper Collins), and two books published by the Overlook Press: Full Throttle: The Life and Fast Times of NASCAR Legend Curtis Turner (which was reviewed on the cover of the Sunday New York Times Book Review) and NASCAR Legends (named book of the year by the American Auto Racing Writers and Broadcasters Association). His origami art has also appeared in the Wall Street Journal. He lives in New Jersey with his family.