Pirates Then & Now : Notorious Outlaws of the Sea (Hardcover) 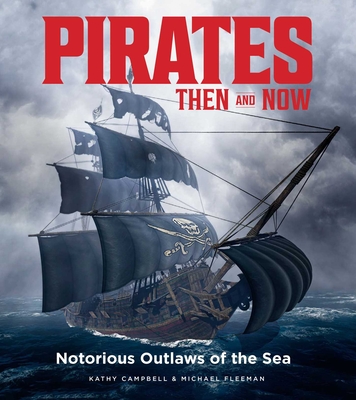 Pirates Then & Now : Notorious Outlaws of the Sea (Hardcover)


Usually Ships in 1-5 Days
Who doesn't love pirates? From Captain Hook to Captain Jack Sparrow, Blackbeard to Black Bart, these pistol-packing, cutlass-flashing, bandana-topped outlaws of the high seas have stirred the imagination for hundreds of years with their adventurous spirit, their love of rum, fighting, plunder, and the way they growl "ARRRR."

This richly illustrated book invites readers to cruise the Caribbean and prowl the Spanish Main. Pirates is a colorful and insightful exploration of real-life buccaneers, corsairs and privateers, spirited women pirates, often-overlooked black pirates, and the pirates of screen, from Douglas Fairbanks to Johnny Depp. Find out why they went to sea, how they really lived, fought, ate and died, and which of the stories about eyepatches, peg legs, walking the plank are true. It's a thrilling ride through time and myth that makes you appreciate why a pirate's life for all of us.
Michael Fleeman covered earthquakes, floods, hurricanes, brush fires and other disasters as a reporter for the Associated Press before moving to the most dangerous beat of all—Hollywood—as west coast editor of People Magazine’s website. Now a TV producer for the crime series Betrayed on Investigation Discovery, Fleeman has authored a dozen true crime books and recently co-wrote a celebrity cancer memoir with Animaniacs star Rob Paulsen. He also appears as a commentator on the series In Plain Sight on ID and Deep Undercover on Netflix, and teaches writing courses at UCLA Extension. He is also the author of How to Survive Anything and he lives in Los Angeles with his wife and three hungry cats.