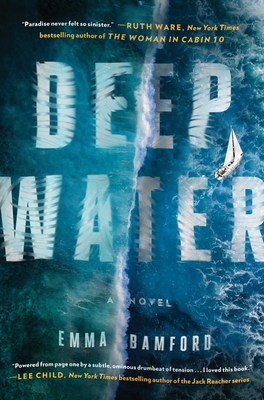 
Usually Ships in 1-5 Days
The dark side of paradise is exposed when a terrified couple reveals their daunting experience on a remote island to their rescuers—only to realize they’re still in the grips of the island’s secrets—in this intense and startling debut in the tradition of Into the Jungle and The Ruins.

When a Navy vessel comes across a yacht in distress in the middle of the vast Indian Ocean, Captain Danial Tengku orders his ship to rush to its aid. On board the yacht is a British couple: a horribly injured man, Jake, and his traumatized wife, Virginie, who breathlessly confesses, “It’s all my fault. I killed them.”

Trembling with fear, she reveals their shocking story to Danial. Months earlier, the couple had spent all their savings on a yacht, full of excitement for exploring the high seas and exotic lands together. They start at the busy harbors of Malaysia and, through word of mouth, Jake and Virginie learn about a tiny, isolated island full of unspoiled beaches. When they arrive, they discover they are not the only visitors and quickly become entangled with a motley crew of expat sailors. Soon, Jake and Virginie’s adventurous dream turns into a terrifying nightmare.

Now, it’s up to Danial to determine just how much truth there is in Virginie’s alarming tale. But when his crew make a shocking discovery, he realizes that if he doesn’t act soon, they could all fall under the dark spell of the island.
Emma Bamford is an author and journalist who has worked for The Independent, the Daily Express, the Daily Mirror, Sailing Today, and Boat International. She spent several years sailing among some of the world’s most beautiful islands and wrote two travel memoirs about her experiences, Casting Off and Untie the Lines. A graduate of the University of East Anglia’s Prose Fiction MA, she lives in the United Kingdom. Deep Water is her first novel. Find out more at EmmaBamford.com.
"A mirage of a novel, seductive and slippery. Turn a page (you’ll turn them fast) and the story shimmering before you might shape-shift: now it’s a game of domestic cat-and-mouse, now a merciless survival narrative, now a feat of literary suspense… Above all, though, Emma Bamford’s Deep Water – also the title of an early work by Patricia Highsmith, whose cool and control Bamford has inherited – is that most exciting, most evolved species of psychological thriller, one in which the darkest dangers lurk not in the next room, not in a secret kiss, not even in the ocean depths, but in a suspicious mind and a guilty heart. Perhaps you’ll hear echoes of Alex Garland’s The Beach, or Catherine Steadman’s Something in the Water, or any number of distinctive mind-benders – yet Deep Water conjures a black magic entirely its own. Can’t remember the last time a novel surprised you? Deep Water is the next time a novel surprises you."--A.J. Finn, New York Times bestselling author of The Woman in the Window

“Strap on your life-vests and prepare for a tense maritime nightmare. Paradise never felt so sinister.” —Ruth Ware, New York Times bestselling author of The Woman in Cabin Ten

"A survival story and a psychological thriller rolled into one irresistible package, Deep Water will pull you under from the start and won’t release you until its full-throttle ending. Emma Bamford’s real-deal knowledge of sailing, the sea, and some of the most remote corners of the world grant Deep Water an undeniable authenticity. She transported me to an idyllic tropical paradise so vivid I could feel the sun and sand, then unsettled me as that sand shifted constantly beneath my feet. This novel is the perfect escape, dark and alluring. I tore through it in a day.  " --Alexis Schaitkin, author of Saint X

“An incredible debut. An incredible writer. An incredible thriller. You’ll be talking about Deep Water to everyone you know. I loved it!”—B. A. Paris, New York Times Bestselling author of Behind Closed Doors

"Powered from page one by a subtle, ominous drumbeat of tension - you know something bad is going to happen, but not where, when, how or why, until ... wow!  I loved this book." —Lee Child, New York Times bestselling author of The Sentinel

“A debut thriller that unfolds with the inexorable force of a nightmare, and an object lesson in why some paradises should stay lost” —John Connolly, international bestselling author of The Parker Series

"Gripping and atmospheric, with writing so vivid you can almost feel the breeze off the Indian Ocean. A fantastic debut." —T.M. Logan, author of The Holiday and The Curfew