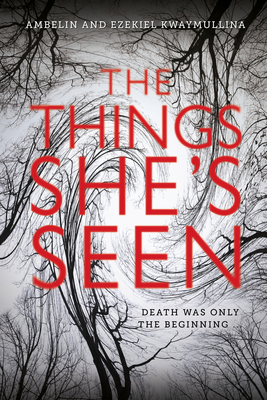 Cosmopolitan called The Things She's Seen one of the best YA books you'll be obsessed with in 2019. Now in paperback, with an updated, more commercial cover, this thriller is poised to break out to an even wider audience.

Nothing's been the same for Beth Teller since the day she died.

Her dad is drowning in grief. He's also the only one who has been able to see and hear her since the accident. But now they've got a mystery to solve, a mystery that will hopefully remind her detective father that he needs to reconnect with the living. The case takes them to a remote Australian town, where there's been a suspicious fire. All that remains are an unidentifiable body and an unreliable witness found wandering nearby. This witness speaks in riddles. Isobel Catching has a story to tell, and it's a tale to haunt your dreams--but does it even connect to the case at hand?

As Beth and her father unravel the mystery, they find a shocking and heartbreaking story lurking beneath the surface of a small town.
Ambelin and Ezekiel Kwaymullina are a brother-sister team of Aboriginal writers who come from the Palyku people of the Pilbara region of Western Australia. They've worked together on a number of short novels and picture books. The Things She's Seen is their first joint young adult novel. They believe in the power of storytelling to create a more just world.
"An #ownvoices story that empowers its female heroines, giving them pride in their lineage and power in remembering." —Kirkus Reviews, Starred

"The Things She’s Seen packs a massive punch; it’s the kind of novel that stays with you and reaffirms just how significant teen literature can be."--Locus

"The two Australian Aboriginal girls at the center of The Things She’s Seen discover just how poisonous silencing can be and how much power it takes to finally break through it."—Bulletin

“The brief, well-crafted novel, written by a sister-brother team… is a welcome #OwnVoices addition to YA shelves.” –The Horn Book

** Winner of the Aurealis Award for Best Young Adult Novel

** A Notable Book of 2019, Children's Book Council of Australia

"An intense, addictive book. Shocking and heartbreaking truths come to light, and the book deftly examines racism, violence, terrible historic injustices and corruption within the police force. This is a book that shows trauma and survival. It's completely gripping, and while highly recommended for young adults, it also deserves a wider readership." —Readings, Australia

"A fusion of ghost story and crime thriller, it also combines poetry and fiction to striking and exciting effect." —The Saturday Paper, Australia

"A ghost story as well as a psychological thriller, The Things She's Seen seamlessly weaves together the poetic and the everyday. A magnificent and life-giving novel." — Justine Larbalestier

"Terrible crimes lie at the centre here; viewed through the eyes of young women of unquenchable spirit, they can be approached, examined, and ultimately solved. This novel will turn gazes in the right direction, and make the caw of every crow more resonant." —Margo Lanagan