Catafalque: Carl Jung and the End of Humanity (Hardcover) 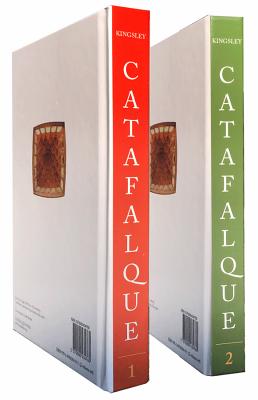 Catafalque: Carl Jung and the End of Humanity (Hardcover)

Catafalque offers a revolutionary new reading of the great psychologist Carl Jung as mystic, gnostic and prophet for our time.

This book is the first major re-imagining of both Jung and his work since the publication of the Red Book in 2009--and is the only serious assessment of them written by a classical scholar who understands the ancient Gnostic, Hermetic and alchemical foundations of his thought as well as Jung himself did. At the same time it skillfully tells the forgotten story of Jung's relationship with the great Sufi scholar, Henry Corbin, and with Persian Sufi tradition.

The strange reality of the Red Book, or "New Book" as Carl Jung called it, lies close to the heart of Catafalque. In meticulous detail Peter Kingsley uncovers its great secret, hidden in plain sight and still--as if by magic--unrecognized by all those who have been unable to understand this mysterious, incantatory text.

But the hard truth of who Jung was and what he did is only a small part of what this book uncovers. It also exposes the full extent of that great river of esoteric tradition that stretches all the way back to the beginnings of our civilization. It unveils the surprising realities behind western philosophy, literature, poetry, prophecy--both ancient and modern.

In short, Peter Kingsley shows us not only who Carl Jung was but who we in the West are as well. Much more than a brilliant spiritual biography, Catafalque holds the key to understanding why our western culture is dying. And, an incantatory text in its own right, it shows the way to discovering what we in these times of great crisis must do.

Peter Kingsley, PhD, is internationally recognized for his groundbreaking work on the origins of western spirituality, philosophy and culture. Through his writings, as well as lectures, he speaks straight to the heart and has helped to transform many people's understanding not only of the past-but of who they are. The recipient of numerous academic awards, he holds honorary professorships or fellowships at universities in Canada, the United Kingdom and United States. Throughout his career he has worked together not only with Native American elders and western spiritual teachers but also with many of the most prominent figures in the fields of classics and anthropology, philosophy and religious studies, ancient civilizations and the history of both healing and science. The author of five books which together have exerted the profoundest and most far-reaching influence outside as well as inside academia, for years Peter Kingsley has lectured very widely-speaking to professional scholars, psychologists and followers of different spiritual traditions, healers and medical practitioners as well as people who very simply are aware of the need to wake up to a reality greater than the one we are used to. His latest book on Carl Jung brings his work full circle, connecting his researches into the distant past with the crisis of the modern world. For more information on his work visit www.peterkingsley.org
"In this remarkable study, Peter Kingsley engages with a question Carl Jung describes as the most telling of one's life: 'Are you related to something infinite or not?' Written in an 'ancient style', 'the choiceless rhythm of the winds and rain', Catafalque is an extraordinary achievement--demonstrating an impressively broad cultural knowledge coupled with an impeccable attention to detail. In its focus on Jung as a mystic and as a magician, it not only confirms Spinoza's thesis that we feel and know we are eternal; it will also provoke and charm the reader by turns." --Prof. Paul Bishop, University of Glasgow, author of Carl Jung and On the Blissful Islands with Nietzsche and Jung"Here at last is the true Jung: the Jung whom those who dare to call themselves Jungians have forgotten and betrayed, a Jung who often is far too frightening to be understood. Nothing could be less comforting than this Jung or less comfortable than this book--pointing as they do to the extraordinary failure of Western civilization to return to its roots, pay respect to its ancestors, listen to its dead. Deeply researched, challenging at every turn, I couldn't put it down." --Maggy Anthony, author of Salome's Embrace and Jung's Circle of Women"Peter Kingsley writes with the force of a sorcerer, which is also what he is writing about. He is an author of the impossible. Perhaps some day I will know the place from which he expresses himself. I have sought it my entire life." --Prof. Jeffrey Kripal, Rice University, Houston, author of Secret Body and Super Natural"For all its scholarly precision, and artistic sophistication, Catafalque is a dangerous book. But numinous truths are often dangerous even to behold, much more to write about. And if you can summon the courage to open your eyes where Peter's magic takes you, you might get a glimpse of a long-lost part of our collective soul." --Adyashanti"In this compelling book Peter Kingsley brings together an extraordinary set of credentials: a body of unequalled scholarship, literary skills which are second to none, and a rare grasp of the living nature of things that lies beyond the constructs of our thought. In his unique regard both for the real or transcendent and for the delicate and ephemeral, he is a servant of the Lord indeed." --Frank Sinclair, President emeritus of the Gurdjieff Foundation, New York, author of Without Benefit of Clergy and Of the Life Aligned"Peter Kingsley's new book is not biographical but historical, in the truest sense of the word. It's not about an individual or individuals but about the whole: about the impersonal and divine energy that manifests itself, time after time, in human form to allow a culture to be born or to grow. Jung, the alchemists, the Gnostics, Empedocles, Parmenides emerge from history as links in a golden chain through which wisdom, philosophy and science have been given and kept alive in the West. But this book also tells a different story--a story of repeated manipulation and exploitation, of devastation of the sacred, of catastrophic losses caused by egotism and the indiscriminate use of 'rationality', which is a story that started long ago in ancient Athens and now is approaching its tragic conclusion. The lament over the death of western culture isn't Jung's lament, or Kingsley's. It's the howling of nature itself, reminding us of our sacred roots and of our ultimate responsibility as human beings." --Prof. Laura Gemelli Marciano, University of Zrich, author of Parmenide and Die Vorsokratiker