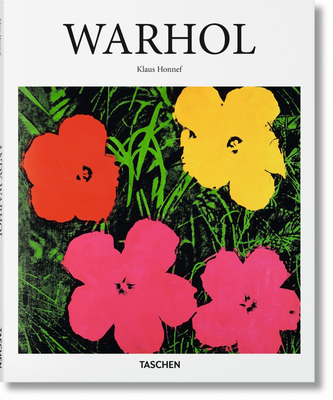 Andy Warhol (1928-1987) is hailed as the most important proponent of the Pop art movement. A critical and creative observer of American society, he explored key themes of consumerism, materialism, media, and celebrity.

Drawing on contemporary advertisements, comic strips, consumer products, and Hollywood's most famous faces, Warhol proposed a radical reevaluation of what constituted artistic subject matter. Through Warhol, a Campbell's soup can and Coca Cola bottle became as worthy of artistic status as any traditional still life. At the same time, Warhol reconfigured the role of the artist. Famously stating "I want to be a machine," he systematically reduced the presence of his own authorship, working with mass-production methods and images, as well as dozens of assistants in a studio he dubbed the Factory.

This book introduces Warhol's multifaceted, prolific oeuvre, which revolutionized distinctions between "high" and "low" art and integrated ideas of living, producing, and consuming that remain central questions of modern experience.

Born back in 1985, the Basic Art Series has evolved into the best-selling art book collection ever published. Each book in TASCHEN's Basic Art series features:

a detailed chronological summary of the life and oeuvre of the artist, covering his or her cultural and historical importance

Klaus Honnef is honorary professor of photography theory at the Kassel Art Academy. He was one of the organizers of documenta 5 and documenta 6 in Kassel, and has been the curator of more than 500 exhibitions in Germany and abroad. He has written numerous books, including TASCHEN's "Contemporary Art "(1988), "Andy Warhol "(1989), and "Pop Art" (2004).