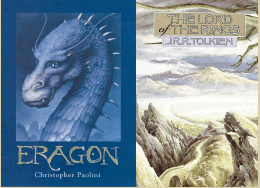 One doesn’t doubt that Sauron, the enemy of the free peoples in J.R.R. Tolkien’s masterpiece, The Lord of the Rings, committed all manner of evil deeds before his career was ended by Frodo’s valor. Enslavement, murder, torture, deception, Sauron stinted on none of these nefarious practices. And yet, for all his ill deeds, one feels sure that Sauron never stooped to the unattributed use of other people's ideas and language. He was proud of his own evil, and even though he took much from his service to Morgoth, the Dark Lord of the first age, Sauron always acknowledged as much, naming his great battering ram Grond, for example, in memory of Mogoth’s war hammer. There is, even for Dark Lords, such a thing as integrity.
The story of Christopher Paolini, author of the highly acclaimed new fantasy Eragon, is an interesting one. Paolini wrote the initial version of Eragon at age fifteen. The book did well enough as a self published title to attract the attention of Random House, which published the book in August, with much fanfare and, subsequently, much success.
That Paolini was profoundly influenced by Tolkien is immediately obvious. Paolini’s dwarves are Tolkien’s Dwarves, his Elves are Tolkien’s Elves. Paolini’s version of Tolkien’s Elves, for example, are referred to as “the Fair Folk,” they appeared from over the sea on silver ships from “Alalea, (not Valinor mind you) though none but they know what, or even where it is.” The elves speak an ancient and true language, and know the true name of all things. Even Paolini’s place names scream out their origins in Tolkien. The “Beor Mountains” (Beor is a figure from Tolkien’s Silmarillion), “Isenstar,” (Tolkien’s River Isen, and Isengard), “Ardwen” (Tolkien’s Arwen), “Furnost” (Tolkien’s Fornost) “Melian” (Tolkien’s Melian) and so on.
Paolini’s use of Tolkien does not stop at the borrowing of place names and inhabitants, however. He introduces a Gandalf like character named Brom complete with “bushy eyebrows,” gruff seeming, pipe smoking, smoke ring blowing, white beard, staff, and so forth. Brom instructs young Eragon on a spring afternoon in a chapter called Tea For Two which is clearly derived directly from Tolkien’s The Shadow of the Past. Brom prefaces his account with the following statement. “If I were to tell you all that tale, we should still be sitting here when spring had passed into winter.” In Tolkien Gandalf prefaces his account to Frodo by saying, “If I told you their whole story, we would still be sitting here when winter comes again.”
Later on in the book, after Eragon kills an urgal, which are Paolini’s orcs, Brom notes that “Few escape unscathed from the slaying of their first Urgal.” In Tolkien the line reads “Many have received worse than this in payment for the slaying of their first orc.” Other instances of this borrowing abound, right down to a laughably derivative glossary. The fact that Eragon is pronounced essentially the same as Tolkien’s Aragorn, is something to consider as well. Whether Paolini was aware of pilfering from Tolkien is really not the concern here. Nor is this a question of legality, a separate issue concerning which I have no real knowledge, and make no assertion regarding.
Whether deliberate or not, whether legal or not, Paolini’s appropriation of Tolkien’s ideas and language is wrong. It is not all right to duplicate the work of someone else, no matter how much one admires it. Indeed, it is the responsibility of all writers to be aware of the complex issue of influence, lest is stray into theft. Paolini has failed in this responsibility miserably. Yet the reading public, not to mention Paolini’s editors, considering Paolini’s youth, and genuine talent, also have a responsibility to convey that to him. Indeed as Tolkien himself said regarding Saruman, “for all those arts and subtle devices...which he fondly imagined were his own, came but from Mordor; so that what he made was naught, only a little copy, a child’s model, or a slave’s flattery.”